Control moss by apply a mosskiller and wait for the moss to turn black/brown at which point it can be raked out (scarified) using a spring tined lawn rake or electric scarifier.  The scarifying process also reduces the build up of thatch (dead grass and other debris).


Prevent moss thriving by tackling the cause.  This can be due to shade on the lawn or bad drainage.  Cut back any plants that are causing shade by growing over the lawn and any low growing branches.  For compacted areas of the lawn, improve the drainage with a garden fork or spiking machine.  Repeat every 4" – 6".  Brush a sandy soil top dressing into the holes to allow better aeration to the roots which helps produce a healthier lawn.


As leaves fall, rake or sweep the lawn lightly to keep it free from leaves and other fallen debris.


Use an autumn lawn fertiliser, which is high in phosphates and potash which will help build strong roots and strengthen grass growth for the winter.  This in turn will produce healthier grass for next year.
Debby
www.debbysgardenlinks.co.uk
Debby's Garden Links - One of the UK's most comprehensive directories
for gardening related supplies and services !!

First day I've managed to get out in the garden in ages.  Always too busy working, updating the websites or other commitments stopping me getting out and doing what I really love.

First job was mowing the lawn.  Have to do this first, I can't possibly start pruning the borders until that is done otherwise I feel its all just getting way too messy.

Edging the lawn and who should pop out to say hello but Bob.  Bob is a little toad - very cute.  He's called Bob because he appeared in the garden, the very next day after our lovely next door neighbor died - he was called Bob too ! 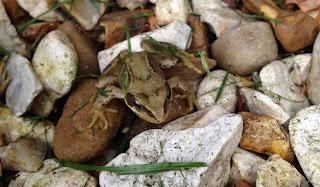 Next job was to "slightly" trim the shrubs.  Should really have looked into when the best time to prune Sambuscus and Kerria was, but it was all getting way out of hand and needed a trim.  Actually ended up being a massacre !!  Note to self - research when you should have done this, rather than getting happy with the loppers !!

Never happier than when I'm working away on my own in the garden, but something always has to spoil my fun.  Today it was the rain (that's unusual isn't it?).  I was determined not to stop until I'd finished though so stubbonly carried on, but at least I got the desperate stuff done.  Loads more to do but that'll have to wait for another day.
Posted by Debby's Garden Links at 17:59 No comments:

We appear to have a new regular visitor to my parents garden - a hedgehog who we have named Harry. Every day for the past week, he's emerged from "somewhere" (worried it's the bonfire !), and taken a wander around the large garden. Amazing that a creature with such small legs can travel so far and so fast !

Realising we didn't know much about hedgehogs and how we can best care for Dad's new "pet", I set myself the task of doing a bit of research - hence this blog post, figured I may as well share my new found knowledge.  If anyone has any tips on looking after Harry, or any other useful information, I'd be very happy to hear from you.  In the meantime, I don't think that bonfire will be getting lit anytime soon !!

Hedgehogs are welcome visitors to the garden and are regarded as a gardener’s friend as they happily munch away on slugs, beetles, caterpillars.  They do no harm to the garden so should be encouraged by providing safe habitats for them to thrive in and raise their young.

DO NOT USE SLUG PELLETS, INSECTICIDES OR HERBICIDES


Attract them to your garden by leaving an area wild and uncultivated.  They appreciate a pile of leaves or logs, or make a shelter for them by building a hedgehog home.  Doesn’t have to be anything too fancy - even a piece of board propped up against a fence/wall will suffice.  Hedgehog comes are best sited in a quiet spot in the garden which is nested under growing plants.


Leave out food and water – see section further down for further information on what to feed hedgehogs.


Compost heaps can provide a good food source for hedgehogs.  Just be careful when you push your fork in – check the heap first to make sure no wildlife has burrowed into it.


Ponds are good for thirsty hedgehogs, but always ensure the side is gradually slopped to allow an easy exit route for


What do hedgehogs eat?


Naturally, they are mainly insect eaters.  They eat beetles, caterpillars and earthworms.


To supplement their natural diet, a saucer of dog/cat food (but not fish based) can be supplied (they can be fussy though and don’t like cheap foods).  Other foods that they enjoy include minced meat, fresh liver and chopped boiled eggs.


Of course, placing fresh food out like this can make that other animals, ie cats, steal it !!  To avoid this happening, provide a feeding station – something that the hedgehogs can get under, but that cats can’t, such as an upturned box with an entrance hole cut into it or a paving slab on bricks.


Always ensure a bowl of water is provided for them during the summer months, and refresh this daily.


Avoid giving hedgehogs milk.  They love it, but it can cause diarrhoea.


When do hedgehogs hibernate?


As a general guide, this is normally between November and mid March but can sometimes be seen during this time if the weather has been mild.   Though this can depend on many factors such as climate, how fit and how fat the hedgehog is !  Hedgehogs will hibernate when it gets very cold because their natural food sources disappear in cold weather.  Larger hedgehogs may hibernate as early as September.  Hedgehogs may wake up several times during hibernation.  If you see one, offer it a little food and water and let it go on its way (unless it needs any other care of course).


Hazards to hedgehogs in the Garden


Hedgehogs are noisy eaters (bit like my other half but he’s not as spikey).

Posted by Debby's Garden Links at 21:41 No comments: 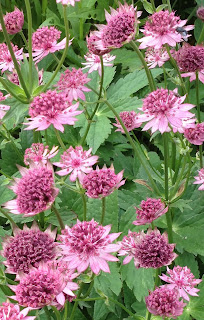 Good for cut flowers.  Cut back flower stems as soon as they start to go brown to encourage second flush of flowers.

Excellent for that cottage garden look.

Lift and divide in early spring if needed. Can take a little time to establish, especially if just divided as they don't like having their roots disturbed.

This masterwort is a favourite of Garden designer Piet Oudolf. 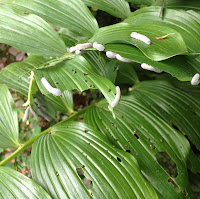 So my little grey caterpillar problem is solved - all thanks to lovely people on my Facebook page.

The nasty little pests on my Solomon's Seal (Polygonatum x hybridum) are Sawfly.  They've got very cute little faces, but they're devouring my plant.  Literally stripping the leaves back to the stem.  They've got to go !!

According to the RHS website, the female lays eggs into the leaf stems.  The larve then feed on the leaves, making small holes first, then eventually stripping the leaves of foliage (mine have got to this stage !).  Once the larvae have got full tummies, they then overwinter in the soil and re-emerge the following spring.

The organic method to rid the plants of these pests is to pick them off (eeeek and double yuck !!).

The chemical method is to spray the plants.  Chemicals recommended are Bayer Provado Ultimate Bug Killer, Bayer Sprayday Greenfly Killer or Py Spray Garden Insect Killer, Doff All in One Bug Spray.  Preferable to do this whilst the larvae are still small - these ones definitely aren't small, but I've got to try something otherwise my plant isn't going to be big and strong next year.  I'll miss its lovely display of white flowers in the spring  :-(

Time for a trip to the local garden centre ....

Yesterday in the garden

Great day in the garden yesterday. The weather looked threatening but it held off. I had one of those days where I feel like I achieved loads, and just wanted to go on and on ...

The grass was so long in the front garden as it hadn't been done for a couple of weeks, but at least most of the dandelions have gone now - thank you Verdone !!

Front garden is tiny but it took me ages to do. Probably due to me chatting to the neighbours.

Out in the back garden, the pond is looking rather clear right now. That UV bulb really does work. Waterfall running slow though so it looks like the pump is blocked again. That's a job for the other half - too smelly and wet for me, and its funny hearing him shreak when a frog jumps near him :-) The gravel around the pond is looking a bit green right now.  I'm a bit of a neat freak and want it to look like new.  So if any readers know of a way of easily getting rid of it, I would be very grateful to know. 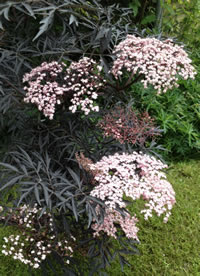 The Sambucus nigra 'Black Lace' is looking rather beautiful right now. Abundance of flowers on it - never had so many.

It's getting a bit big now and needs a chop, but now is not the time, it's way too pretty.  I just love the foliage and flowers on this plant.  Thankfully its quite happy to have a good pruning so I think this year it will be going almost down to ground level.  I've another one that hasn't been maintained so well and that one is getting rather woody in the centre.  It also doesn't flower very well.

Elsewhere in the garden, the lavendar is just starting to come into flower.  I need more of these in the garden, but encouraging bees into the garden isn't a good thing as far as OH is concerned - bees make him shreak as well as frogs !! 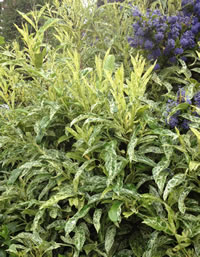 The Ceanothos is also flowering profically.   That sits next to the Prunus laurocerasus 'Marbled White' which is also looking rather stunning right now.  I love the foliage on this plant - it may be just a common Prunus but its very different and looks good all year round.  Again, its another plant that withstands a good chopping and it can be cut to whatever height you want.

The lawn isn't looking particularly good though.  All the weeds have gone now (againk, thank you Mr Verdone !), but there's lots of bare patches.  Not going to do anything now, but a good reseed on the bare patches is going to be necessary come September time.  Maybe I should do what Mr Titchmarsh did on 'Love your Garden' earlier in the week, and replace it with artificial grass.  I love the smell of freshly cut grass so this has never been an option for me, but I have to say it did look good on the telly.  Would it look so good in real life?  Who know?  Probably down to the quality of the artificial turf I guess.

Anyway, thats it for another week.  Back to the hard slog of work, and maintaining Debby's Garden Links on an evening.

Until next week dear garden, I'm sure I'll find much more to do then.

Posted by Debby's Garden Links at 06:50 No comments: